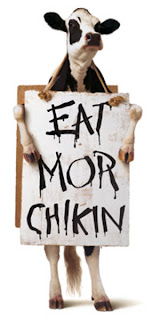 In today's society, we have all sorts of programs to help people out when they have done something, well, stupid.  People are all the time getting some extension, a bail out, or any number of second chances (that are all called second chances no matter how many chances have come before it).  Not so in the old days.  Back then evolution was weeding out the stupid left and right.

Take Odysseus' men for example.  They were told in the underworld by the blind prophet Tieresias, "Don't touch the cows if you want to make it home." Not a hard direction to follow.  But here they are, rowing towards home, and they want to rest.  "We're tired!  We can't row all day like you Odysseus!  Let's stop at that nice island WITH ALL THE COWS ON IT!"

It was only a matter of time before someone wanted a steak.

Of course, cows aren't normally found in the wild, so naturally, the owner of the cows did not like to see good ol' Bessie being chopped up and grilled.  This owner is Helios the sun god.  He complains to Zeus, who  is about as fed up as can be over these guys and sends a lightning bolt their way, just as they were taking off.  The whole ship sinks and everybody (except our hero, of course) dies.  Odysseus clings to a piece of his boat and waits for some large great white to come and finish him off.


Who is Helios?  Thought Apollo was the sun god?  Well, that depends on who you read.  Some say Apollo and some say Helios.  I prefer to think of it this way.  Pulling the sun across the sky leaves little room for other duties, so Apollo splits his time with Helios.  There.  All wrapped up nice and pretty.  Some interesting facts about Helios - he is the father of Circe and once Hercules got so mad at how hot the sun was that he shot arrows at Helios to make it cooler.  Hercules never was the brightest of individuals.  Also, one of the wonders of the ancient world, the Colossus of Rhodes is a huge statue dedicated to Helios.
Posted by Mark Alford at 7:05 AM