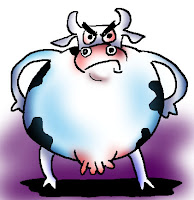 Odysseus goes here to speak to Tieresias, the blind prophet.  What Tieresias tells him (Don't touch the cows!), while is the most important thing that happens here, is not nearly the most interesting thing.  Odysseus pours out some blood to attract the blind prophet.  It also attracts many others.  It is the other spirits that we will discuss.

The first spirit he sees is Elpenor, who evidentially died at Circe's island. He got drunk while sitting on her roof and fell over and broke his neck (sounds like a Darwin Award to me)! I guess nobody knew that and they just left him there. He begs for Odysseus to go back and bury him so he can rest.

Next he sees his mom.  She died after he left for the Trojan war. She doesn't recognize him.  This really bums him out.

Then comes Tieresias.  Blah blah blah there.  By the way, he also tells Odysseus that if he gets home, it will be in a strange boat and he will have more problems there than on his way home.  Oh yeah, don't forget to give Poseidon a sacrifice when you get there.  He also says, give your mom some blood so that she will recognize you.

It grosses him out a bit that she is drinking blood, but she does recognize him again.  She tells him that his wife has been faithful to him.  That must hurt after his little fling with Circe.

A couple of other women who are wives and daughters of the men who sailed with him show up. 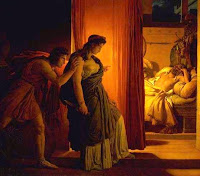 Next comes Agamemnon King!  He drinks the blood and tells Odysseus that when he gets home, he should smack his wife around a bit since all women are evil.  It seems that he did not have a good experience when he got home, to say the least.  His wife had found someone else and they stabbed the poor guy.  Well, he is not so poor.  He brought home a girl with him to have on the side.  I'm sure he was, in his heart, faithful to his wife.  This girl could see the future and told him that his wife was cheating on him and planned to kill him that night, but he didn't listen.


Achilles shows up and whines about how awful it is to be dead.  He has a neat quote, "Better to be a slave in the sun than the king of Hades."  I'm sure that John Milton had this in mind when he has Satan standing in hell, his demon buddies all depressed because they just their butts kicked out of heaven.  Satan says, "Better to reign in hell than to serve in heaven."  I love that epic!

Ajax shows up, drinks the blood and tells Odysseus he is still angry with him (During the Trojan War, Odysseus tricked Ajax into giving him Achilles armor).  Then he walks away.  Odysseus, being a smart guy, didn't stop the huge guy who only needs a coat of green paint to effectively play the Hulk.

Hercules shows up and he is having a ball down here.  Neat contrast between him running around and Achilles crying.  I know some myths have Hercules living in Olympus and some with him in the stars, but I liek the idea of Hercules running around having tons of fun like my black lab on the beach!

Finally he looks around and sees on his way out Minos, Tityus, Tantalus, and Sisyphus.
Posted by Mark Alford at 10:45 AM

I'm pretty sure your blog just saved my butt in English!!! Thank you SO much!!

Glad I could help! Now if only MY students would listen to what I have to say.

Tell your teacher that I think you should get extra credit.