Stop 5 - Odysseus and His Men Are Invited to Dinner

Cannibalism is not restricted to the deep jungles of Africa. There are cases all around the world. I found a couple of places where it tried to even put the practice on the Hebrews while they were wandering looking for the Promise Land. This intrigued me since I thought I would have remembered reading about that at some point (I've read most of the Bible, but there are some parts that I haven't gotten to yet). I looked it up. Most did not give a passage, but just said that the Hebrews did this act. Finally I found where someone quoted the passage being Deut. 28: 53-58. I looked it up and sure enough this is what it says:

53 Because of the suffering that your enemy will inflict on you during the siege, you will eat the fruit of the womb, the flesh of the sons and daughters the LORD your God has given you. 54 Even the most gentle and sensitive man among you will have no compassion on his own brother or the wife he loves or his surviving children, 55 and he will not give to one of them any of the flesh of his children that he is eating. It will be all he has left because of the suffering your enemy will inflict on you during the siege of all your cities. 56 The most gentle and sensitive woman among you—so sensitive and gentle that she would not venture to touch the ground with the sole of her foot—will begrudge the husband she loves and her own son or daughter 57 the afterbirth from her womb and the children she bears. For she intends to eat them secretly during the siege and in the distress that your enemy will inflict on you in your cities.

However, I still wasn't satisified and was pretty sure that this never happened, so I did some backwards reading and it was clear that there were a lot of bad things going to happen being listed. Finally I came to the verse that makes it make sense - Deut. 28:13 -

However, if you do not obey the Lord your God and do not carefully follow his commands and decrees I am giving you today, all these curses will come upon you and overtake you:


Then followed the list of curses. So the Hebrews did not do this act after all. A No Prize to anyone who can find differently. 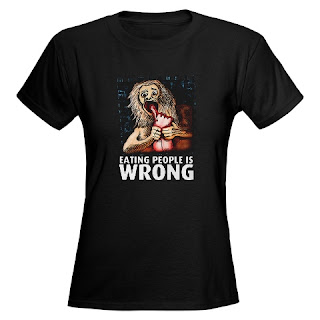 The Egyptians believed that Osiris gave them crops so that they wouldn't resort to cannibalism. Unfortunately, nobody made that clear to the Greeks. When Odysseus lands on the Island of the Laestrygonians, he has one of his lesser known but by far his most deadly encounter. He goes in with 12 ships and sends out three guys to scout. They meet the leader, Antiphates, and he is the one that devoured the first of the men. Two of the men escaped and ran back to tell Odysseus. One of these guys is Macareus, who survives the whole ordeal and is able to escape with Odysseus. Lucky him. The boats were parked so closed together that only Odysseus was able to get his boat out. Twelve ships in, one ship out. The other 11 ships were pelted with boulders and the men were picked off by harpoons and taken ashore to be eaten.

By the way one of the rarest diseases in the world is Kuru, a disease that is caught through cannibalism.  I think it has to do with consumption of the brain.  It is only found in New Guinea and it is fatal.  Sufferers of this disease lie in a comatose state for anywhere between a half a year and a year until they die.
Posted by Mark Alford at 8:39 PM