Aeolus is a minor god that helped Odysseus out by giving him a bag of bad winds so that only good winds would blow him home.  Of course, he didn't tell his men who assumed it was gold and when he fell asleep (right as they approached Ithaca) they opened the bag, sending them way off course.

Who is this guy?  Most of us probably don't know that much about him, so this will be a Tribute to the Unknown God posting (actually, it will be a 5 for 1 deal). Well, he has a floating island close to Sicily for one. The gods used him to release the winds for bad storms. His nickname is Hippotades (the controller of horses) since the Greeks saw winds as horse-shaped spirits.

His dad is Poseidon (makes sense since Poseidon is also credited with stormy seas) and the father of the four winds:

Boreas - The North Wind - he has serpent tails for feet and likes to hang out at Mt. Haemus (where Typhoon likes to hang out).  He usually uses a conch to blow his winds and has golden/amber colored wings.  He is very strong and tends to be destructive. He even shipwrecked Hercules once.  He also disguised himself as a horse and got some fillies great with child (Why?  I don't know).  Of course people would remark that these horses are as swift as the wind.  His most famous story is the kidnapping of Oreithyia.  He did this because her parents delayed in answering his marriage proposal.  They bore two children, both boys, who were a part of th Argonauts.

Eurus - The East Wind - He also has wings but is a bit more gentle.  He is known for bringing rains, so he is usually seen with an upside down vase pouring out water.

Notus - The South Wind - known for his fog and mists, shepherd and sailors didn't really like him.  However, he was revered by thieves. 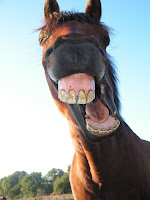 Zephyrus - The West Wind -  Probably the best known of the four winds.  Cupid used him to bring Psyche to his palace.  He known for being gentle.  Despite that, one of his more famous stories is about violence.  Zephyr fell in love with a young man named Hyacinthus.  When he saw Hyacinthus playing discus with Apollo, he got so jealous that he caught the discus in mid air and sent it back at him.  The discus hit Hyacinthus on the head and killed him.  Where his blood hit the ground, the hyacinth flower bloomed.  He too fathered horses.  Two of these horses were ridden by Achilles.  They could talk.  Rumor has it that they are the ancestors of the famous Mr. Ed of TV fame.


Next stop - Odysseus and his men get invited to dinner!
Posted by Mark Alford at 6:20 AM