The Sole of Mythology

The following information came from hypebeast.com:

"Beginning April 2009, Lacoste will begin production on a pack of (9) sneakers celebrating the legend of Rene Lacoste and the mythologies surrounding crocodiles around the world. The special collection begins with the release of their Tiller Egypt, Revan NYC, and Tennis 91 West Africa models. The shoes will be released over three months (April, May and June 2009) and will only be available from an exclusive selection of stores globally." “Crocodiles are featured in many myths and legends around the world with diverse stories ranging from Ancient Egypt where the powerful half man, half crocodile Sobek came out of the sea to create the world. 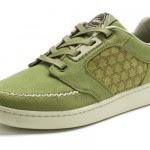 To the Albino Crocodile in South Africa which inhabits the sacred Lake Venda. In Melanesia the Kawai people of Papua New Guinea believe that they are descendants of Nuga, a half man, half crocodile creature created long ago from a piece of wood and in New York we explore the reported sightings of sewer crocodiles around the city.”
Posted by Mark Alford at 8:02 AM

Email ThisBlogThis!Share to TwitterShare to FacebookShare to Pinterest
Labels: stuff