Thought I would dive into this.  I'm sure that once I post this, I'll think of several others that ought to go here.  But for now, here are some of the top myths that brought their heroes only chagrin: 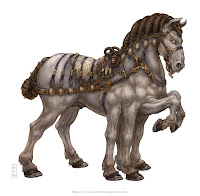 1. Loki - Norse - Loki had a problem, as usual.  He had convinced the gods to place a bet with a guy who wanted to build their wall for them in a certain time.  He put incredible hindrances on the guy and only allowed the guy to use his horse.  Well the guy turned out to be a giant and worked at incredible speeds.  In order to stop him from winning the bet, he turned himself into a mare to distract the guy's horse and prevent it from working.  Well, the horse turned out to be rather randy and got Loki great with child.  He couldn't come back into his Loki form until he gave birth to a bouncing baby stallion (which had eight legs, by the way).


2. Midas - Greek - was a judge in a music contest between Apollo and Pan. He chose Pan over the god of music and so Apollo gave him ass ears.  He lived in perpetual fear of anyone finding out and swore his barber to secrecy.  The barber, about to burst, dug a hole and told his secret.  Later, reeds grew in the hole and every time the wind blew, the reeds whispered the secret to anyone who would listen.

3. Belleraphon - Greek - tamer of Pegasus, slayer of the chimera, and all around great guy, Belleraphon believed his own hype and felt that he should live on Mt. Olympus with the gods.  Growing tired of waiting for the gods to see his greatness, he decided to ascend himself.  Pegasus, a little smarter than his master, kicked him off before they reached the top.  He landed hard and was laughed at for the rest of his life.

4. Atea - Oceania - Creator gods everywhere laugh at poor Atea.  Atea is a sky god that decided to create his own perfect wife - Fa-ahotu (much like that Canadian guy that created his own robotic wife). He cooked for him, scratched his back, and everything else he thought would be perfect.  It wasn't until Fa-ahotu gave birth to their three kids that he noticed that he forgot two very important thing.  His kids almost starved to death as a result and he had to nurse them himself.  Opps!

5. Jason - Greek - Not only did he have a funny name (well, if everyone else has names that end in -ous and -eus, Jason probably did seem funny), he had an embarrassing end to his heroic career.  Famed for his Argonauts and his quest for the golden fleece as well as his mistreatment to Medea who practically did everything for him, he didn't go down in a hero's death.  Many years later, after Medea killed his kids and left him, he was reliving the glory days and checking out his ship when the mast, after years of neglect and rot, broke and smacked him in the head, killing him.

6. Adad - Babylonian - this guy is such a clutz that he makes thunder by tripping over things and falling all the time. 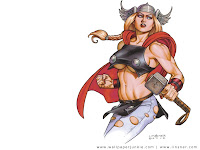 7. Thor - Norse - One day Thor lost his hammer, which was embarrassing enough, but it was the getting it back that was the most embarrassing.  Loki figured out that Thrym the giant had it and would only give it up is Freyja married him.  Freyja liked Thor just fine and would do many things for him, but one of those things was not to marry Thrym.  So Heimdall improvised and convinced Thor - Thor the mighty - Thor the strong - to dress up as Freyja to trick Thrym.  Not one to be out embarrassed, Loki dressed up as his servant girl.  And so it came to pass that our two cross dressing gods arrived at Thrym's house where Thrym was a bit taken aback at how unpretty Freyja really was up close (but solved that problem by drinking plenty of ale) and so excited he was, he gave the hammer back BEFORE going through with the marriage.  As soon as he had his hammer back, Thor made up for dressing as a girl and killed all of the giants at the hall.

O.K., what did I miss?  I know there are several more embarrassing myths out there.
Posted by Mark Alford at 7:51 PM

This inspired me, but not so much that I actually wrote my response post to it. But I want to! I totally want to!

Instead I made a little list of my own.

Also, thanks for the invitation to write on your blog. We could totally switch some time and do guest posts on each other's blogs - whadya think?

The real reason I don't post is because I am totally overwhelmed with school, but hooray for Spring Break! (It's over Monday ...)

But if I had the excuse of switching guest posts ... well that might get me posting even during the school year. I could come up with a theme for you and vice versa. Let me know if you're interested!

Anyone who has not seen Alia'a list needs to click her name and head right on over there for some good reading!

And I cannot wait to have Alia bring some class to this blog. I'll read her blog and go wow, then head over to my blog to see something like "Destroyer of Ponies"...