Well, while my Alaskan friend Dani Harper might not bee too impressed with this, we've just had 7 inches of snow over here and have had a blast.  When it snows in the south east US, everything shuts down for a while.  So it's been sledding with my boys and getting smacked with snow balls that are a bit too much ice.  Anyway, on with today's post.  I know I've been a bit deliquent in posting this past week, but as I've said, I've been outside.  Kind of hard to post while sledding.

We're going back to our space posts to add something new.  Kaguya is a space probe that has just gone to the moon.  It has been 50 years since any spacecraft has visited the moon (and with the recent news from Obama, the US won't be going back anytime soon), so this trip is a pretty cool thing, in my book.  It took some amazing pictures like this one of an Earth rise: 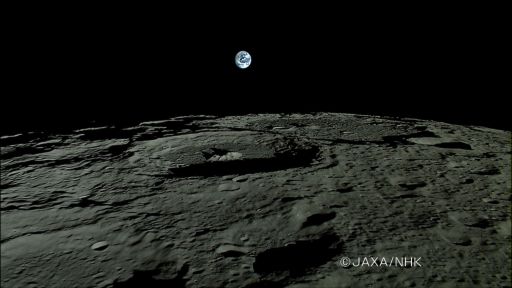 So why am I talking about this on a mythology blog?  Because Kaguya is, of course, a mythology name.  It is not Greek or Roman (although another name for the project is Selene, a Greek and Roman reference), but rather a Japanese one.  This makes more sense to me since the mission is from Japan.  Kaguya is a princess.  To make matters harder to research, she is also the name of a character on Sailor Moon.  The real Kaguya is the main character in Japan's oldest folktale, "The Tale of the Bamboo Cutter," probably written in the 9th century or so.  Here are the basics of the story:

An old man one days notices a light coming from a stalk of bamboo.  Thinking this strange, he takes a closer look and spies a tiny girl.  He and his wife (there names are Okina and Ouna, which are the names of the two satellites that the lunar craft shot up to send it's images back) raise this little girl until she grows to be a very beautiful woman.  She is known as the Shining Princess of Supple Bamboo, but her friends called her Kaguya for short.

Kaguya has many men call upon her hoping to win her hand, but she does not desire any of them, no matter how hard they try.  Some of them believe that persistence must be the key (hey, it worked for my dad).  The five most persistent of these suitors are assigned impossible tasks to prove their devotion.  We know enough to mythology to know that no task is impossible.  The first guy is to retrieve Buddah's beggin bowl.  Being a smart guy, he figured that it would take to long to travel all the way to India, so he gets a fake.  She doesn't fall for it.

The second guy has to get a branch from a tree from the island of Paradise.  The branch has jewels all over it.  Not learning from suitor number one, he too tries ot fake it.  This time, the deception works and Kaguya has to marry him.  Before the ceremony can take place, however, the jewellers who faked the branch show up and demand payment for their work, ruining his plans. 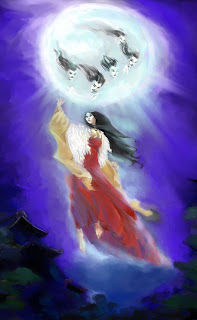 The other three all try to complete their tasks instead of lying and all three are unable to do so.  Did I say that all impossible tasks are possible?  Hmmm...  Oh yeah, I was thinking of Greek and Roman impossible tasks.  These, of course were Japanese and everyone knows that while you have a better than average chance of performing a Greek impossible task, you don't have squat when it comes to the Japanese impossible task!
Why did Kaguya refuse to marry these guys?  She has a secret.  Her secret is revealed when the emperor himself falls in love with her.  She comes from a race of people who live on the moon and she was punished by having to live on earth for a spell, a spell which is about over.  She has grown to like Okina and Ouna and does want to leave.  They try many things, but not going back to the moon is, well, impossible.

All is not lost, however.  At least not for Kaguya.  Her people come to get her and seeing her grief, give here a feathered robe to wear.  She write a quick note for the emperor and then puts the robe on, which makes her forget her sadness and hops on their flying chariot and is never seen again. The note told the emperor that she really did like him, but oh well. Her adoptive parents, well they didn't get a robe of feathers to forget their grief.  In the end, they die of sadness.
Posted by Mark Alford at 3:46 PM