O.K., last post God pretty much had Marduk against the ropes.  Today we will see if Marduk can gain a second wind.  He did, after all, totally destroy Tiamat to get his spot here in Creation Smackdown 2010, so we can't count him out.  And why is God smiling?  Is he over confident or is he merely using his left hand to keep things interesting?

The Babylonian account also has a watery chaos. The word for "deep" in the bibe is tehowm, which is similar in form to Marduk's nemesis, Tiamat. 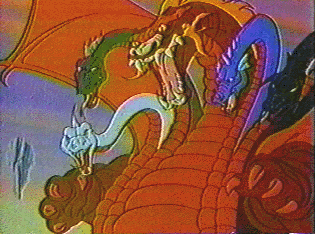 O.K., technically this is a picture of Tiamat, the dragon from the old Dungeons and Dragons cartoon of the eighties (I remember it being a great show, but if I watched it today, I'd probably think it was cheesy), but since the Babylonian Tiamat was also a dragon, this picture will have to do.

As a part of the creation story, Marduk has to kick Tiamat's butt.  The idea is that the words Tiamat and tehom are too linguistically similar and since Tiamat is a water goddess also then this is proof that the Hebrews borrowed their story from the Babylonians.

Not being a linguist, this is tricky for me to figure out as being proof or not.  From what I've read, they both have the same root, but tehowm is masculine and inanimate and Tiamat is feminine and alive.

Another connection is from this verse:
1:3-5 And God said, Let there be light: and there was light. And God saw the light, that it was good: and God divided the light from the darkness. And God called the light Day, and the darkness he called Night...

The Enuma Elish also has light being around before the sun and the moon were created.  There is a small difference in that the Enuma Elish has a god as light and Genesis has a god creating the light.  However, this comparison is a big one in the fight for the Marduk original creation team.

The Babylonian myth also has a dividing of the waters and land; however, so does practically every other creation story.  Here a third possibility emerges, maybe all cultures are pulling from an even earlier story, prehaps the original myth.

This is also similar in the Enuma Elish.  It is also similar once again to all creation stories.  The Marduk story does a better job story-wise because it also describes the making of the constellations as well.
Both versions have the creation of man from dirt.  In Genesis God creates a figure in dust and breathes into it.  Marduk's version has Ea creating a man in dirt and killing another god (Kingu) to supply the dirt man with blood.  With The Enuma Elish coming first, this is a pretty good case for some copying.  Better, at least, that Tiamat.

Here is another similarity in Marduk's favor.  When the gods finished, they threw a party.  In fact, the party lasts almost as long as the creation does.
There is another connection between Marduk's slaying of Tiamat and the biblical account of Yahweh's conquering the primordial sea-monster Leviathan:

This seems to me to be closer to a copying than anything previous, but it doesn't happen in Genesis!  This passage is taken from Psalms 74.


So what is the verdict?  Well, I'm not a scholar who has read the originals, btu I'd have to say that while there are some similarities, the Marduk story lacks the definitive punch to be the origin of the Genesis myth.  If anything, Genesis and the Enuma Elish may have drawn from an unknown source, but copying to me seems unlikely.

What do you think?  Did I leave something out?  If so, it was not on purpose.  Please set the record straight in the comment section.

Next post - something senseless and useless, probably.
Posted by Mark Alford at 10:36 PM