The Whetstone of Death!

First of all, what a hectic week!  Not only am I running in different directions, but my laptop has decided it has no hard drive.  I know it has a hard drive.  It had a hard drive when I last shut it down.

Anyway, sorry for the delay between posts.  Let's get back to the 13 Treasures of Britain.  Treasure number 8 is a pretty neat one.  If you look back at the previous treasures you'll find that they are pretty much ordinary things.  They are something extraordinary that could pass as ordinary.  This is a pretty universal feeling.  How many of us at one time or another fancied that we have some very valuable collectible stored away in our attic.  We just didn't know the value of it yet.

This treasure is no different.  It is a whetstone (a rockish thing used to sharpen knives or swords).  It is officially called the Whetstone of Tudwal Tudglyd (or Hogalen Tudwal Tutklyd).  Here is the deal - if a brave man sharpens his sward with it, then later uses that sword to cut a man, that man will die.  If a cowardly man  sharpens his sword with it, then later uses it to cut a man, that man will not be hurt at all.  Once again we see the emphasis on bravery with the treasures. 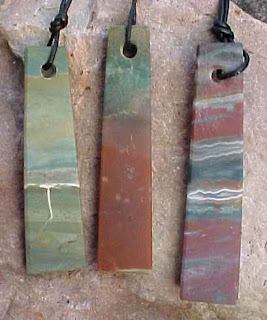 Other than that, I couldn't find much more on Tudwal or his whetstone.  However, this is not the only place in mythology that whetstones are used.  In Norse mythology, we have Hrungnir, the giant who had a head of stone, a heart of stone, and a shield of stone.  For a weapon, he didn't use a whetstone to sharpen his sword, he used the whetstone as a weapon!  He just threw the darn thing at his opponents.  He threw it at Thor and it got stuck in Thor's forehead.

Thor goes to a sorceress named Groa and she starts chanting a magical chant (which is a bit redundant) and the whetstone starts to move.  Thor is so excited, he decides to tell her something to make her happy.  He found her husband, who she thought was dead, carried him across a river, and her husband is on his way home.  He said that he didn't completely wrap up the guy as they were crossing the river and one part of him froze off - his toe (get your mind out of the gutter!).  Thor threw his toe up in the sky where it became a star.

No body knows the exact star the old Norse looked at and said, "Hey, that looks like a toe!" but some scholars think it is Rigel, the bottom right bright blue star in Orion (see below): 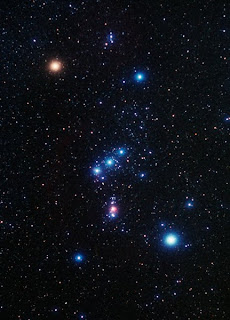 See the really bright bottom right star?  That's the toe.  Orion is pretty easy to spot in the sky.  Orion's belt is the three stars in a row in the middle of the constellation.  You can see it now.  If you are in the northern hemisphere, go outside and look east, the constellation is rising (east is where the sun normally rises, if you are unsure which direction to look).  If you are a morning person, you can see it in the west before the sun rises.  For the southern hemisphere readers, I'm not so sure where Orion is, if it is even visible at this time of year.  If anyone knows and wants to leave a comment, you'll have my thanks.

Anyway, she gets so excited about the return of her husband, that she forgets the chant!  The whetstone is stuck in Thor's head to this day.  Now, don't you go around throwing whetstones to see if it would make a good weapon for you to use.  Anytime a whetstone is thrown, it makes the one in Thor's head move and that hurts him.  You wouldn't want to make him angry, now would you?

Hopefully, this nice long post makes up for leaving you with Destroyer of Ponies! for so long.  Sorry about that...

No need to apologize the Destroyer of Ponies was awesome.

Also, I really like it when you post about non-Greek myths. I already know the Greek ones so well that I tend to move quickly through them, but I love your retellings, and it's best when I get to learn about new myths, too.

(In other words, I really liked this post! Also, you should do a series on different cultures' myths about constellations along with handy guides to finding them in the night sky. Cuz I want to know that and I know that secretly you're just posting for my enjoyment.)

Alia, it is great to hear from you again. I really miss Paleothea. If you feel the need to blog anytime soon and just don't want start up Paleothea again, feel free to guest blog for me. Give this blog some class, you know.

More constellations it is. I've got to keep my target audience happy. I really love looking at the stars and such. I just haven't been able to lately.

Like the whet stones were can I get them