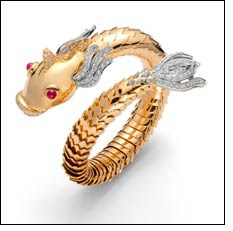 I found this news article on the web about mythology and jewelry.  There is this guy named Robert Coin who is evidently a world renown jeweler (I didn't recognize his name, but then again, I don't know any jeweler by name).  He designed a line of jewelry called the Nemo line (after Captain Nemo or Finding Nemo?).  In it, he draws from the mythology of the Greeks and Phoenicians for inspiration.  Here is an excerpt from the article:
Interestingly, these endearing marine creatures are often found depicted in mythological Greek tales where Poseidon, the sea god is said to drive a chariot pulled by sea horses. They are also called ‘Hippocamp’ and often decorated mosaics and Roman baths and can be seen on the 18th century Trevi fountain in Rome.
The whole article can be read here:
http://www.fibre2fashion.com/news/fashion-news/newsdetails.aspx?news_id=75903 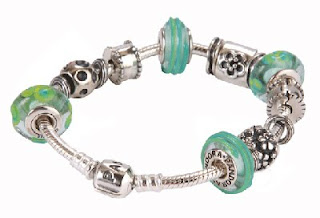 Another mythology inspired bit of jewelry is the Pandora bracelet.  This, however, has little more to do with mythology than the name, but deep on their website, you can find a reference to the curiosity of Pandora being the inspiration for this line.  Well, I found it once on a web site.  I can't find it on their current web site.  My wife has one of these bracelets.  It is essentially a charm bracelet, but instead of the charms hanging, they slide around the bracelet.  It is pretty neat looking.
http://www.pandora-jewelry.com/
Posted by Mark Alford at 7:25 PM