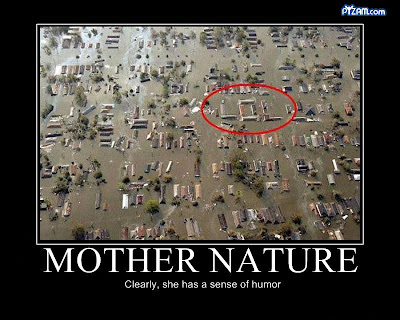 Mother Nature has to do a lot. Make flowers grow, control the tides, send in storms, gentle showers, sunshine, take care of forests, wild life, combat pollution, make rainbows, the list goes on and on. Over the years and thorough out the multitudes of cultures, mankind (excuse me, I was being sexist there) peoplekind have given her many names from Gaia (Greek) to Tonantzin Tlalli (ancient Mexico) to Phra Mae Thorani (Thailand). In fact, only the Egyptians screwed it up thinking that earth was male (Geb).
Seeing how important she is to us, we can forgive her for seeking out a few ways to make an extra buck or two. Even if she chooses to make a cheesy commercial now and then. If you are as old as I am, you grew up knowing that Mother Nature does NOT like to be fooled by margarine:
O.K., How much money do you think she earned from those commercials? Well, it was enough to keep her busy for two and a half decades. In the meantime, she has been making a nice living hawking environmental products on her online store.

And by keeping people informed on her own cable news channel (although times are tough for her there as she has been reduced to showing reruns of Captain Planet).

She also made a few bucks guest appearances in a few kids' shows every now and then, like her cameo onThe Year without a Santa Claus:

In fact, she is in quite a lot of Christmas specials (as I remembered after plugging in Santa Claus and Mother Nature into Google images a minute ago).
But now, she's back in the commercial biz again and I have to say, 1. I miss the old maragarine days and 2. Mother Nature isn't looking too good lately.
In today's time, everyone going green and all, you would think that Mother Nature would pick an ad for a hot news environmentally sound sports car or something like that. But no. Check out her newest ad line:
I guess the true lesson here is that money really does make the world go 'round.
Posted by Mark Alford at 10:30 AM