There is a site with a pretty funny take on Norse mythology. It is a web comic called Brat-Halla and takes the approach of the Norse mythology meets Brady Bunch. How does Odin, the All Father, live up to his name? Is it really just one big happy family?

My favorite comic is when Odin and Frigga (his wife and consequently mother of all the brats seeing how Odin is a bit more faithful than his Greek counterpart) run into Zeus and Hera at the local warehouse shopping center for gods (Godsco). Here it is: 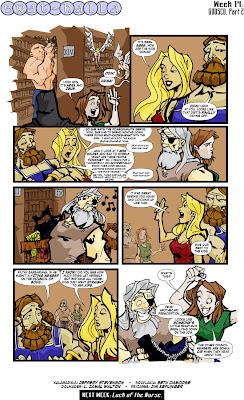 You'll have to click it to see it bigger on the original site, since this is as large as I can get the blog site to print it. If nothing else, you'll need to read it to understand when I say the "little Spartan" comment is hilarious!

Here is how the web comic's creators explain the premise of the story lines:

Brat-halla is a mythology webcomic about the Norse gods during their elementary school days. All-Father Odin and his wife Frigg constantly have their hands full with youngsters Thor (the super strong runt of the litter), Loki (the god of mischief who likes to play with dolls), Balder (the invulnerable pretty boy), Hod (the blind god of darkness and winter), Hermod (the hyper super speedster), and all the rest of the Norse pantheon.

If nothing else, it is a fun way to brush up on the Norse gods and goddesses (yes, they do change things with poetic (cartoonic) license, but for the most part, they stay within range of who the gods are.

I give this comic a rating of 3.5 lightning bolts out of five. The drawings are usually pretty well done (I especially like Thor) and the idea is very clever and original. The actual humor is hit or miss. I might read through 4 of them without laughing and then crack up on the fifth. The ones that do hit the funny bone make it worth going through the others. The running jokes are usually pretty funny (like poor little blind Hod cursing his luck when the Valkyries come by).

Boy does Loki Look annoyed that Hod has beat him to all the best “Thor related punchlines” … I don’t doubt that Loki will now feel the need to get creative about it.