Xena and other Trouble Makers 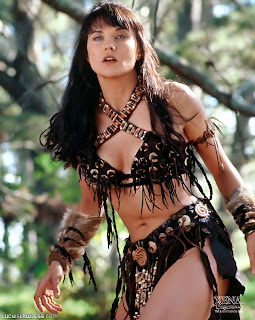 In the early 2000s, an astronomer named Mike Brown found a new planet orbiting further out than Pluto.  It was all a big buzz and it a moment of jest, he named it Xena.  In fact, he did not only find one, but three fairly close together (tiome wise, not distance).  One has already been talked about on this blog (Makemake).  Since then, I've heard another side of Mike Brown from fellow blog friend Laurele.  It appears that he takes great pleasure in being the one who "killed Pluto."  Since I love Pluto, I'll not delve into his cute little story about how his daughter helped name them.
Anyway, back to the story at hand, Xena began to stir up a lot of trouble.  Xena was a little smaller than Pluto and the question became, "how small can a planet be?"  Several theories came up and people argued this way and that and some came up with planet definitions that included Charon (Pluto's moon), Ceres, and even our own moon.  Others tried to find an even path, while others went so far as to say that Mercury was in danger of losing its planet status.  The end result, as you know is to ban Pluto and all the other planet-like objects out there from being planets.  This has caused a lot of debate and hard feelings.  They also named these smaller planet-like objects dwarf planets, which has also caused quite a stir.  They then named Xena, and all other dwarf planets beyond Pluto, Plutoids, which, as you can guess, has caused all types of problems.

So, what do you officially name a dwarf planet that has caused so many issues?  Yep, Eris.  Xena is now named after the goddess of discord herself.  Eris is the one, according to some stories, that started the whole Trojan War by throwing that golden apple at the wedding reception causing Hera, Athena, and Aphrodite to argue over who was the most fairest.
The planet - err - dwarf planet, has these characteristics:
One more stop in space, and we are done in our space theme.  The last stop is the best, though.
Posted by Mark Alford at 1:23 PM

Just an extra tidbit...before having there official names, I had always heard that Xena's moon was called Gabrielle!

I didn't know that. Too funny!