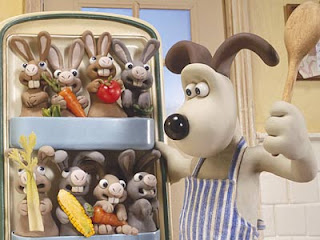 Now, we've already done an entry on lycanthropy, but this goes off in another direction.  Turning into a wolf is not the only trick in town.  In fact, almost all cultures have a were-something.  My favorite is boanthropy, the act of turning into a cow.  You know, being a were-wolf is cool.  Being a were cow..., now that is about as useless as being a were-rabbit or a were-goat.  Goat?
Wait a minute, turning into a goat might have its uses, such as in living a life of crime.   That's right, just think of the possibilities that present itself when you are a were-goat to live a life of crime.  In fact, in one of those cases where mythology comes to life, we have proof of a were-goat car thieving ring going on.  I got the article here, but you can read it below:

*For attempting to ‘steal’ a Mazda car

It was a shocking sight yesterday as men of the Kwara State Police Command paraded a goat as an armed robbery suspect.

The goat "robbery suspect"
The goat "suspect" is being detained over an alleged attempt to snatch a Mazda car. The mysterious goat, according to the Police Public Relations Officer, Mr. Tunde Mohammed, while briefing bewildered journalists at the Force headquarters, is an armed robber who attempted to snatch the said car, Wednesday night, and later transformed into the goat in a bid to escape arrest.

He explained that men of a vigilance group in Anifowose Ipata/Oloje areas of the state capital had chased two armed robbery suspects who wanted to demobilise the Mazda car with the intention of stealing it, and

"while one of them escaped, the other was about to be apprehended by the team when he turned his back on the wall and turned to this goat. They quickly grabbed the goat and here it is.’’ Mohammed said.

The police spokesman said the goat "armed robbery suspect" will not be left off the hook untl investigations into the case are concluded.

He also said that no fewer than five stolen vehicles have been recovered by the state Police Command while some suspects were also arrested. Among those arrested, he said was one Idowu Oni of Araromi area of Akure who escaped from Akure Prison.

He added that the escaped convict was arrested in Ilorin after stealing a Mazda 323 car belonging to Mrs. Henrietta Ayijesu.

He also said another armed robbery and rape suspect was in their custody, assuring that the suspects will soon appear in court.

Love the were-goat. Best shapeshifter story I've heard in years! Thanks for sharing it.