So what did Saturn say when he saw his dad in the shower?

"I see Uranus!"
O.K., those of you who did think I would resort to potty humor just has not been paying attention to this blog.
I'm knocking out two planets for the price of one here: Uranus and Neptune.  This is because neither one of them were named these names for any particular reason.  More on that in a minute.
First of all, Uranus. 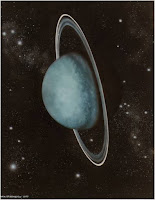 This planet got knocked at some point and spins on its side.  It's other well known feature is that it has rings.  It has 15 known moons, but none of them are named for mythology figures.  Instead, they are all named after Shakespeare or Pope female characters.  Go figure.
The guy who found it wanted to name it Georgium Sidus after King George in an extreme fit of brown nosing.  The problem was that some French guy also claimed to have found it.
Next, Neptune: 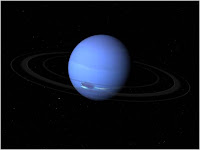 It also has rings and a big storm spot.  All of the moons are named after water deities.  This was found purely by math.  In fact this was the problem.  The guy who solved the math problem and the guy who  actually aimed the telescope in the right spot both wanted to name it.  Wouldn't you guess it, one was French and one was English.  Now we have a problem.
Eventually they solve the problem by saying, why not just keep the mythology names?  Both sides agreed and done!  Kind of anti-climatic, if you ask me.
Don't worry, our space trip gets better again after this.  But first, we'll have another space break and learn what the ten worst moments in mythology sports are.
Posted by Mark Alford at 10:51 AM

Email ThisBlogThis!Share to TwitterShare to FacebookShare to Pinterest
Labels: space