Watch dogs, guardians, spies for the gods.  They are in every culture's mythology.  This is a fitting topic since Christmas is coming up and we know that Santa has the ultimate spying techniques (he knows when you are sleeping, he knows when you're awake).  So let's look at mythology what spies we can find.
My favorite is Ratatosk, the squirrel that runs up and down Yggdrasil, the Norse world tree.  This squirrel dutifully reports to all that will listen what he sees.
Of course, you have Argos, the hundred eyed giant that never completely sleeps.  Some eyes 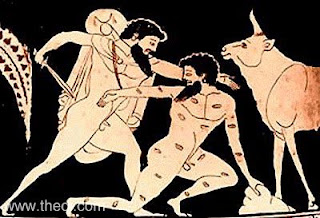 sleep while others stay awake and watching.  Hera used him to what over Io (the poor girl turned into a cow so that Zeus could pretend he wasn't cheating on Hera).  Hermes did him in by playing music until all 100 eyes fell asleep and then chopped his head off.
Mertseger of Egypt, was a guardian of the Valley of the Kings.  She lived nearby and watched for trespassers.  When she saw one, she would send out poisonous animals to sting and bite him.  If he repented, she would heal him of his wounds and send him on his way.
Back to the Norse, Odin had two ravens (Thought and Memory) that would fly around and report back to him what they saw.
But what about today?  O.K., anyone in a public high school knows that 1984 has come at least partially true.  Cameras are everywhere recording your every movement.  But we can do better than that.  Would you believe a camera system that can predict criminal behavior?  Yep, now science has passed mythology with a device that recognizes potentially criminalistic behavior, alerts a dispatcher who then in turns alerts nearby police to go to the area.  Don't believe me?  Google it!  Or just go to this site which is one of many on the web about it.
Posted by Mark Alford at 11:51 AM

Read the article with great interest.

From a practical standpoint, the camera security is of questionable worth -- Are there really enough police positioned close enough that they could actually arrive on the scene before the suspects left? I doubt it.

The value would be in theoretically having an image of the crime and its participants in order to prosecute them later. I say theoretically because the camera angle shows faces poorly -- although we have technology that can fix that now too.

On the other hand, municipalities don't have the budget to hire the number of policemen needed. The days of the beat cop (who knew the neighborhood and the people) are largely over, which is a shame, because that method appeared to have worked the best.

I enjoyed the blog --- fascinated by Odin's ravens. Great story material there!

PS - if you check my blog, you'll see that Lord Alford won the last draw.

You have been nominated for the Happiness Tree Award :D