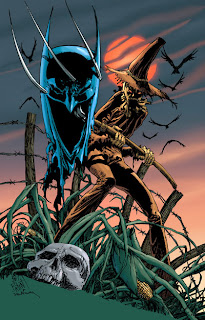 In an older Batman comic (Knightfall to be exact), the Scarecrow (the lame villian in the Batman Begins movie) claimed that there was a god for everything, except fear and he was going to be that god of fear.

You see, this is why comic books are not good resources. Granted, comic like to drag myths into their stories, but this time they are completely wrong.

Mr. Scarecrow, meet Deimos, the Greek god of fear. His name even means fear. He and his brother, Phobos, the god of terror, hang out with their daddy, Ares. They are completely Greek since Ares needs them to install fear. The Romans never really took to them since Mars an install fear all on his on. 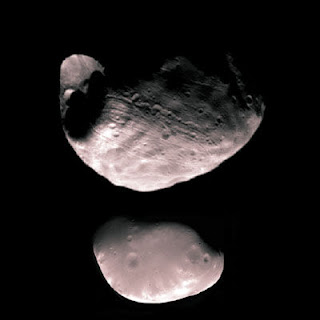 It seems, though, that the Scarecrow is not the only one not up to date on his mythology. Asaph Hall, the astronomer that found the moons of Mars decided to name them after Mars's sons, Phobos and Deimos, even if they are not really sons of Mars (by the way, grammatically speaking, you are supposed to make Mars possessive by adding the 's but to make Zeus possessive you only add the ' which makes for punctuational fun for everyone - Strunk and White (kings of grammar style) suggest you just say the ___ of Mars or the ___ of Zeus in order to avoid confusion all around). I guess we can forgive him since it does make sense to have fear and terror hanging around the god of war.

In the picture, Phobos is the big one. They are really two little asteroids that got caught in Mars's orbit (oops, the orbit of Mars).

Next we continue our tour of the solar system and find out what planet comes after Mars (and it is not Jupiter...) - oh and happy birthday to me!
Posted by Mark Alford at 9:45 AM