The Birth of Venus

Most people are familiar with The Birth of Venus by Botticelli.
The picture is simple in its mythological terms. Obviously we are taking the birth of Venus as she sprang form the ocean after Cronus did the unthinkable to his father, the resulting body part hitting the ocean and springing forth life. On the left side, we see the winds, Zephyr and Aura, who are using their power to either raise the shell or, as every adolescent male tends to think, to blow her hair off the important parts. The idea is that they are showing the chaos before the titans took over.

This picture shows her as being modest, which doesn't usually fit her character in myths. Botticelli did this on purpose because of the Aphrodite of Cnidus, also called Venus Pudica (the Modest Venus), a statue of Aphrodite sculpted in 4 BC. It was discovered about the same time this was painted. The statue shows her covering her groin with her right hand. To add to this modesty, one of the Graces rushes forth to cover her with a cape.
The land is covered with Laurel and Myrtle trees. Laurel is symbolic of peace and victory (maybe the victory of love over all or the victory of Cronus over Uranus). Myrtle is symbolic of love and is often used with Venus. This is another Birth of Venus by Alexandre Cabanel 1863.

The Birth of Venus by William-Adolphe Bouguereau, 1879.

No modesty here. I'm liable to get my blog suspended for this one.

Of course, I did not get on this topic because of culture or any other redeemable quality. I saw this picture by Derek Thompson from Futurama that made me think of it. 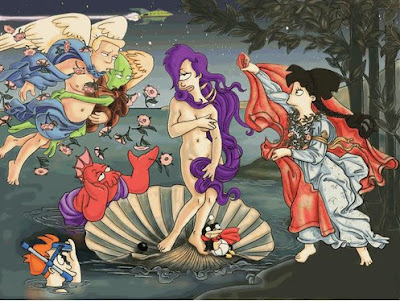 And last, but not least, the Mad Magazine version. 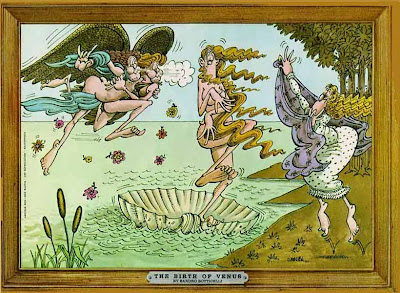 Of course, there are several others and I may have missed your favorite. If you have a favorite Birth of Venus, leave a link to where we can see it.
Posted by Mark Alford at 7:43 AM

O.K., I give up trying to format this post. It looks fine in edit mode but no matter how many times I try to make the text and the pictures work, it still reverts back to the crowded look. Oh well...