Lord of the Silver Bow 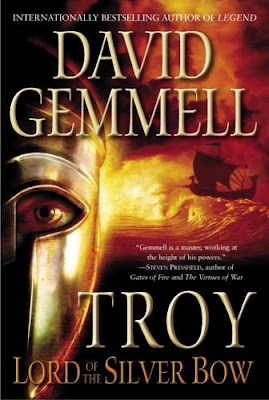 Troy: Lord of the Silver Bow is an excellent book for any mythology fan despite the fact that the gods are absent. The worship is there. The prayers are there. The belief is there. The gods, however, do not show. In all ways, this is historical fiction - not fantasy. Reading how people react and how the gods are such a part of their life is very compelling and leads me to believe that maybe I was born in the wrong century.

As the title suggests, this series deals with the Trojan War, but this particular book (there are three in the series) is a lead up to the war. It follows three characters that would not be the first three characters I would have thought to be chosen for such a book. Without spoiling anything, here are the characters:

Aeneas - Known to many as The Golden One and to his friends as Heliakon, this is NOT the Aeneas in the movie Troy (you know, the little sap that turns up at the end and leads the people to run away). O.K., he is the same character but man! this guy is tough. He has ticked off the Mykene king (none other than Agamemnon) and now has assassin after assassin coming after him not to mention hoards of Mykenes. In every way he can be kind, he can be equally brutal.

Andromache - The wife to be of Hector. She is not a stereotype figure. She stands on her own rights and I ended up really liking her character. Many times a writer or a movie attempts to strengthen up a female character just to make her more likable for today's times. You know the type. They always put in a female villain so our new female hero can get in a fight with her. Not so in this case. Andromache is a strong female. She refuses to kneel before kings. She has a background, a life, a character that is believable. She has faults and woes that we share. While this book focuses more on Aeneas, she has a large part and I believe, from reading the book jacket, that she plays a much larger role in the second book.

Argurious - a Mykene warrior who is renown for his heroics, fighting ability, and honor. Through a series of unfortunate events, he finds himself protecting the one man he wants to kill - Aeneas. He is the least focused on of the three major characters, but no less skillfully developed.

There are many other characters as well. Agamemnon makes an appearance. Paris and Hector. King Priam is in it quite a lot, as well as many of your other Trojan War background characters like Kassandra. Odysseus is a side character that appears quite often. True to form, he is crafty and creative. Big strong pirates can't wait for his stories. Who was notably absent? Achilles. Like I said, the war doesn't happen in this book and so Achilles is not yet needed.

You need to read this book. Barnes and Noble put it in the fantasy section, my library has it in the general fiction section. It doesn't matter which section you find it in, get it!

His website is being redesigned but can be found at: http://www.davidgemmell.com/. The Troy series is his last, as he died shortly after completing them.