I've always been fascinated by Icarus and the following he has. There is an asteroid named after him, lots of artwork, a Cirque du Soliel act, even a song by Iron Maiden. Go to Google and you will find that Icarus has 1,850,000 entries while Hercules only has 1,770,000 entries. Hercules! Come on! The strongest hero ever! He even had a TV series and an Disney movie and he still can't get as many Google hits as Icarus.
Why the big deal? It is a short myth about the folly of not listening to your father. Me being a father, I think it is a great lesson to learn. I'm thinking about reading about Icarus's fall to my sons every night. 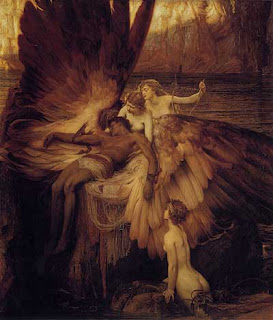 Despite that we get paintings like this one, The Lament of Icarus, by Herbert Draper. With the three maids caring for his body it's just like any death of King Arthur picture out there. Don't get me wrong. I really like this painting. It's a good use of brown colors and the wing are pretty cool, but the title! The Lament! The moral is not to hero-worship this guy.
I think it is because we admire his spirit. His refusal to be confined. His desire to take risks. After all, we do admire those who take chances and win. Those who go against the status quo. So I guess it is only right that we have a lament. He is a reminder of the pitfalls of being wrong.
This next one is a little hard to see in this reduced state, but is by far my favorite Icarus picture out there. It is called Landscape with the Fall of Icarus by Pieter the Elder Bruegal. I show this to my class every year and see what they think. At first they want to know why I'm showing it with an Icarus lesson. Then they start looking. It usually doesn't take too long for one of them to stop looking at the sky and look where he falls. 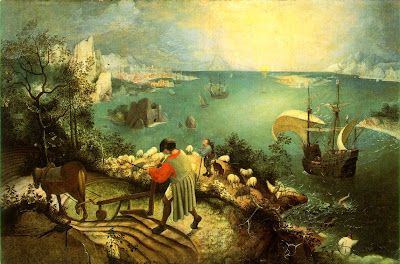 At this point they get confused as to why nobody in the painting has noticed this guy falling from the sky. That's the point. He went out for his own glory and his fall does not deserve to be noticed or honored. Nobody cares. This is why you listen to your father. After all, father knows best, right?
I'll end with this most unusual picture by Douglass Allchin called Homo Icarus: 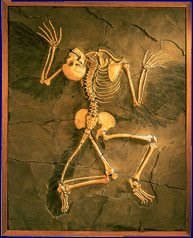