Technical difficulties were experienced after Thor's lightning strike.  We over here at Bubo's Blog have been drifting through time much like the cast aways in Lost.  However, things are back to normal and though it has seemed like a week since the last Ragnarok post, for us here, it has been about 5 years. 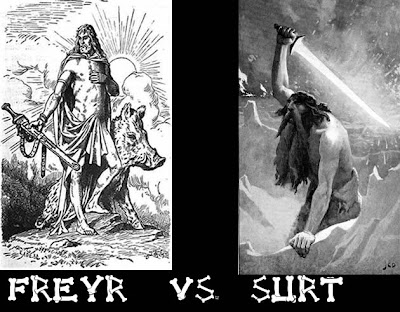 Surt is patient - especially for a giant.  He knows the time will come for him to bring death and destruction upon Midgard and Asgard.  He does not know when.  He does not know for what reason, other than the obvious pleasure of watching mortals die.  He doesn't know much of anything, really.  I mean, after all, he is a giant.  However, he knows enough to wait.  And wait he has for centuries.  Now the cock has crowed and the forces of the giants and Hel have combined to finally put an end to the gods.  He looks forward to the day he can sit back and enjoy life in the finer parts of the world.  Maybe even sit in Odin's throne.  He can taste to roasted raven now.  His sword is made of solid flame and he knows that there is only one sword in existence that can match it.  Freyr's self-fighting sword.  He saw that sword the day Skirnir, Freyr's servant, brought it into his lands and threatened to use it against the giants unless Gerd, the pretty giantess, agreed to marry his master.  He's thought of that weapon ever since and has always wanted to see which weapon was the stronger.  Surt smiles.  Killing the weak will have to wait.  For now, he must seek out the one sword he fears.
Freyr's mother-in-law is a giant, so he has no problems at all with the upcoming battle.  He kisses his dear Gerd goodbye and rides out to the battle field on his chariot. Once there, he releases the mighty boar that pulls the chariot.  For a moment he watches Gullinbursti's glowing mane as the beast tears into the enemy and the he too jumps into the fray.  He makes short work of many giants and the warriors of Valhalla fight even stronger when they see him by their side.  Out of the corner of his eye, he sees Tyr and Garm already locked in battle and briefly wonders where Thor has run of to.  Before he can act, however, he hears his name bellowed out over the field.  Surt, king of the giants, has challenged him to battle.  Nobody even seems to notice these two mighty warriors squaring off as the battles continue to be waged.
"Where is the sword?"  Surt demanded.
Freyr realizes that this is why Surt has chosen him for battle.  Skirnir has had the sword ever since the mission to get his wife, but Freyr fears that the servant will not be able to match Surt, should Surt come after him.  "The sword is broken," the god lied.  "I do not need one to take on the likes of you giants.  Have you not heard of the way I killed your friend Beli with an antler?  But never fear, I have another sword and it is sharp and will take care of the likes of you."
The giant grumbled.  Then there is no other need for me to worry.  You are nothing.  With that, he raised his fire sword high and came down for the killing blow.  Freyr, however, was not ready to die and managed to block this blow with his sword, though he could feel the sword shake under the pressure and knew that it was no match.  He knew he would have to end this battle quickly if he wanted to survive.  Thinking fast, he whistled for his boar and then jumped to avoid another strike from the fire sword.  The flames on the sword were starting to get bigger and hotter and his shoes smoked from the heat.
Surt's eyes glazed over as blood lust began to take control.  "I can do this all day, but you'll soon get tired.  Die now and I will only make your death agonizing and not excruciating!"  For those of you viewing at home, you will no doubt be impressed by the depth of Surt's vocabulary.  Now you know why he's king.  However, before Freyr could even consider this sweetheart of a deal, the grunt of the glowing boar interrupted the giant's speech.  As Surt skewered the pig with the flaming sword (thus cooking it at the same time), Freyr picked up a shattered shield and threw the point of it right into Surt's eye, killing him.
Well, that was supposed to be what happened.  Instead, the shield (which is a clumsy object to throw unless you are skilled in shield throwing like Captain America) bounced off the side of Surt's head.  Surt, furious at this insult to his battle prowess, chopped down with a speed and fury unlike any other and sliced Freyr in half.  At this killing, the flames on the sword began to burn brighter and hotter than ever.  Even Surt could feel the heat blistering his gloved hand.  It did not stop him, though.  At this point Surt goes into a beserker rage and begins to tromp through the battlefield, burning all with his wild sword strokes.
The Winner -  SURT!
The Bad Guys: 3
The Good Guys: 1
Next up, Tyr must stop the second deadliest canine in all of existence - and he must do it short handed (ha!  get it?)  Oh well.  None of you voted for poor Tyr to win.  Can he overcome the odds?  We'll find out next time on SURVIVOR RAGNAROK!
See all the Ragnarok posts.  Just scroll down to the bottom to start reading if you want to read them in order.
~
Posted by Mark Alford at 2:00 PM