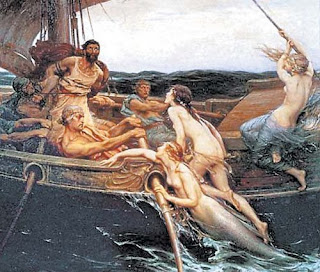 Odysseus was warned about these singing creatures that no man can hear and live. Hubris kicks in and to show how manly he is, he wants to hear them and live.  He has his men tie him to the mast while they have beeswax in their ears and row.  No matter how hard he strains, he cannot break the bonds and can say he is the only person to hear their song and survive.  It seems he learned nothing from his encounter with the cyclops...

Now, I thought we might explore who these sirens are.  The word itself is still used today.  The sound maker on the top of emergency vehicles are called sirens since we are to stay away from them (as in get off the road and let them pass).  It also can refer to a manipulating woman.

I'm not so sure that they really deserve that last one.  The sirens are not so bad and were not always monsters. There are five of them.  Many time we only think of them as three, but that is more because we have gotten so used to women coming in threes (Gorgons, Fates, the Grey Women, etc.).  Their names are Aqaope, Thelxiepia, Pisinoe, Leucosia, and Parthenope.    If I thought I could spell them without having to look at them, I might consider one of these names for my daughter-to-be...  On second thought, can you imagine poor Thelxipea trying to learn how to spell her name in preschool.  All the other little Greek kids could sign their drawings.  I also feel for the poor teacher who looked sown at her roster of incoming students and saw Aqaope.  How in the world do you pronounce it?

This is a sort of a cross between Carrie and Siren
Anyway, they used to be BFFs with Persephone.  When she was kidnapped by Hades, it seems it was not only Demeter who went searching for her, but the sirens as well. They prayed  that they would grow wings so that they could search for her more efficiently.  They also prayed that they would not lose their beautiful singing voices.  Both prayers granted.

They lived happily for a while.  Enter Hera.  Boy she has a way of mixing things up a bit.    She got them to enter Greek Idol with with the Muses.  The Muses, of course, sang better and back then the winners of Idol could either cut a record deal or pluck the feathers from the losers and make crowns with them.  The Muses chose the feathers.

Odysseus is not the only hero to make it past these defeathered beauties.  Jason and the Argonauts did as well - mostly.  Orpheus, one of the best musicians in history, quite possibly better than that fiddle player Johnny from "The Devil Went Down to Georgia," played a song to mask the song of the Sirens.   One Argonaut (a rather unfortunately named Butes) did hear them and jumped overboard. It is said that Aphrodite carried him away before he died.


According to prophecy, the Sirens would die when a ship passes by unharmed.  This would be Odysseus and his crew.  When he made it past, the Sirens jumped off a cliff into the murky deeps in a manner that would have made the Sphinx proud.  We know this to be true because the body of poor Leucosia washed ashore in Italy (Leucania).

(by the way, kudos to all of your who filled in "my parents went away for a week's vacation" after reading the first line of this post).

I'll leave you with this political cartoon from way back in the 1990s involving sirens: