Mr. Mythology Does It Again 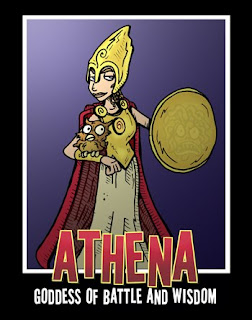 My friend Mr. Mythology, teacher extraordinaire, has created another website.  This one is titled Mythology Teacher.  I first stumbled upon his Nixa Mythology site when I was looking for something different to do with my teaching of the Trojan War.  He has an excellent Where's Waldo type of Trojan War Find It that he created.  Once I saw that I knew this was a good source of ideas.

Well, he has begun to make all his expertise and artistic ideas available to all teachers of mythology.  This site has clever ideas like Athena Barbie, Reader's Theatre (where he takes myths and puts them in play form), posters (like the one you see here), and King Arthur Action figures.  He doesn't stop there.  He has a page not only for Greek, but for Roman, Arthurian, and Norse.  He has plans to create a page for Japanese, Russian, and the Arabian Nights.  There are Web Quests, Mythology in the News, and his on explanation of why teaching mythology is important.  There is even a store where you can buy his posters or his mythology text books.  I did not know he had written and illustrated his own textbooks.  You can bet that I'll be getting my hands on one of these before too much longer and reviewing it here as well.  And best of all, he linked right to Bubo's Blog.  Obviously a man of great taste.

So, I encourage EVERYONE - not just you teachers out there - to go to his site right now and check out what he is doing.

This is a great site! I've bookmarked it as a resource. Mythology is important to me as a writer because it helps me recognize -- and strengthen -- the themes in my work. I also enjoy spotting them in movies and other pop culture.

It is a great resource and only promises to get better.

Dani, I'm glad to see you back. I've noted your new blog address and changed it here on my site. For those of you interested in Dani's site, it is located on the side bar links under Way Past Normal.

By the way, my wife is so tired of me pointing these out in movies...