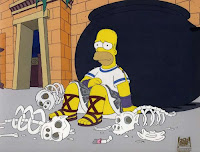 Basically, the men stop at Circe's Island.  Some go ahead to scout out and find all sorts of animals.  They get to Circe's house and she uses her magic to turn them into pigs.  One gets away, goes and tells Odysseus, who feels that the man is a coward for running away.  He goes and with the help of Hermes, defeats Circe, she turns his men back to men and falls in love with Odysseus.  When he leaves, which in some accounts is over a year later, sometimes knowing how long he stayed and sometimes not realizing the time that flew by, she tells him to go seek out the blind prophet Tieresias in Hades for help.

This is how Odysseus tells his story (which would be the Homer version).  However, other poets tell that more happened and that he and Circe, um, held hands.

Searching for what happened at first came up blank, until I found it on Theoi.com.   It seems that most people cannot agree, but here are the different versions:

Hesiod says that there are three kids:  Agrios, Latinos, Telegonus - these boys rule some people named the Tyrrhenians.  I looked up these people, but quickly became bored with it.


Another version from Eustathius says that Telemachus ventured to Circe's Island after his father's death and that he married Circe and that Penelope married Telegonus.   EWWWW!

Eugammon also says this but adds that Circe made them all immortal.  So I guess their weird little twist is still going on today.

Psuedo-Apollodorus tells us only that Penelope and Telegonus married and that Circe sent them to the Island of the Blest (Maui?).

Pseudo-Hyginus says that Athena is the one that orchestrated the intermarriages.

And lastly, Oppian tells us that it was Telegonos that killed Odysseus with a spear made from the stinger of a sting ray.  It was of course, not on purpose (well, he meant to kill the guy, but did not know it was his own father).


There are a few that I left out.  Check the Theoi site for the complete list.  Basically, what we have here is one messed up ending for the family of Odysseus.  Some things are best left unknown.
Posted by Mark Alford at 9:18 AM