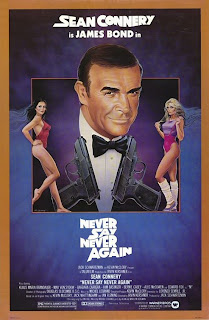 The Mantle of Tegau Eurfron and Eluned's Stone and Ring are treasures number 14 and 15; however, they do not appear on every list and when they do, Rhygenydd's crock and dish are made into one treasure and one of the other treasures are dropped so that the number stays at 13.  Neither one of these are traditional, but as they do appear, I thought that they should be recognized.  Sort of like recognizing Never Say Never Again as a Bond movie, when it really isn't.


Tegau Eurfron's Mantle belonged to Eurfron the Fair (that's what the Tegau part stands for).  She had a nickname - gold breasted (wow, all sorts of James Bond references this post).  She got bit by a snake on her breasts and they had to be removed, so she had gold ones built to replace them.  This story does not survive in the English versions, but there is a French romance that includes it.  This mantle is much like the other treasures: only a woman who has been chaste could wear this and have it fit.  Women of the more, er, experienced type, would find the mantle too short (which probably suited their purposes anyway).

Eluned's Stone and Ring is a little harder to find the answer to.  I found a Eluned who was a 5th century saint, but nothing connecting him to a ring.  One source stated that the wearer would become invisible, a bit already done in the treasures.  It appears that you could wear the ring normally, but when you hid the stone on the ring (with your hand or something) it would hide you.  Did I mention already done?  One different aspect is that it seemed to free Owain from being trapped or imprisoned, which may imply a bit of intangibility ot go along with that invisibility.  While many scholars credit the many rings mentioned in Norse sagas as being the source for Tolkien's magic ring, this certainly has to be part of it.  He would have been familiar with this story I'm sure.

And leaving you with this disturbing picture, I'm off to figure out the next long drawn out theme posts.  Maybe the stops of Odysseus, the Ten Labors (I know some of you thought it was 12) of Hercules, or Norse death.  I don't know.  Whatever it is, I hope it doesn't take another ten months to finally finish!
Posted by Mark Alford at 9:21 PM