What Are You Going As For Halloween?

I never dressed as a mythological figure for Halloween, unless you count the year as a kid a made a mummy outfit out of toilet paper. It wasn't exactly mythology and it was an awful costume. I thought I would take the time to look on the Internet for real mythology costumes. There were several sexy goddess costumes that could be bought pretty much anywhere, but one stood out from the rest. 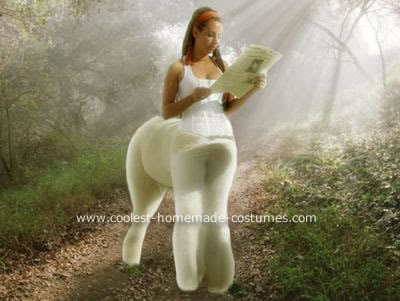 As you can see, I got this pic from http://www.coolest-homemade-costumes.com/coolest-centaur-costume.html. If you go there, you'll find how she made this costume (the fur took over 40 hours alone). Pretty neat. Can't say that I am that dedicated to mythology or to Halloween to spend that much time on a costume, but pretty neat all the same.

How about you? Anyone here go as a mythological figure for Halloween or a costume party? Post a comment and let me know!
Posted by Mark Alford at 8:19 PM