To Marry a Goddess 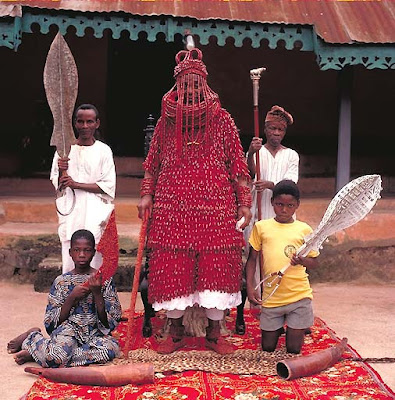 Six hundred years ago, Olowo, the King, fell in love with Orensen, a very beautiful woman. Unfortunately for the King, she was a goddess who could not live with a human. She was forbidden to see women pounding spices, draw water, or throw a bundle of wood to the ground.

Because of his love for the goddess, and in order to marry her, the King promised her that his other wives, in front of her would follow these same restrictions. After several years, the King’s wives became jealous and revolted. They did everything they were not supposed to do in front of the goddess, who then cast a spell upon the entire kingdom. The goddess promised that people of Owo, would die of famine or sickness if the King and his chiefs did not celebrate every year a ceremony in her honor. The drums should beg her pardon and sing her praises. One also had to offer her a sacrifice of a man and a woman.

This ceremony, Igogo, still exists, but the human beings have been replaced by a sheep and a goat.

Email ThisBlogThis!Share to TwitterShare to FacebookShare to Pinterest
Labels: Africa