St. Brendan the Navigator, Part I

What if someone said that he saw a person with a pig head running around? Chances are he is a liar, right? What if that person was someone trustworthy, say Honest Abe Lincoln (the man did walk through a snowstorm just to return a library book)?

That is the problem we have with today's story. St. Brendan is a monk that started many churches in the early 500s. Some of them still exist today. He is a person from history that would, at first glance, seem to be trustworthy. However, there is one journey that he made that seems to be a bit of a stretch to be believable. One reason for this is that the accounts of this journey were written down in the 1200s and may have been a bit stretched.

St. Brendan, after many years of devoted service to God, is visited by an angel. This could happen for one of two reasons, either the angel is happy with him and wants 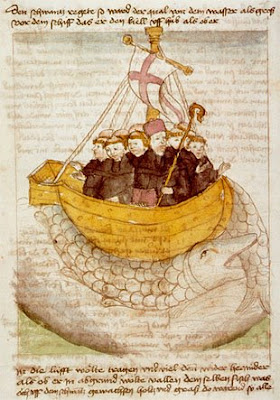 to show him paradise, or the Isle of the Blest (which, incidentally, Spaniards named Brazil after) or the angel is mad at him because he burned a book because it had a truth about creation that Brendan didn't believe. Either way, the angel says (basically), "Go west, young man. Go west."

So off Brendan and a few of his favorite monks go in a little boat out to sea. The accounts of his journey have him seeing all kinds of wondrous things, such as swine headed men, an island of fire giants that hurl fire at them (well, duh, what else would a fire giant hurl), columns of crystal rising up to the sea, and a large fish named Jasconious that they mistook for an island until it swam down when they tried to build a fire on it. You know, like in Pinocchio.

Eventually he winds up on land. His monks explore for 40 days and can find no end to the land. The angel then tells them to go home and they load up their boats with strange fruits and jewels (fruits are strange, not the jewels) and off they go.

Great story and widely believed for a while. Many maps included St. Brendan's Isle (in various places, of course). It is even said that Columbus studied St. Brendan before his trip in hopes to land on the isle to stock up on supplies (remember, everyone knew that the world was round in Columbus's day - the problem was that it was too big to sail completely around (and would have been if not for America in the way)). By Columbus discovering America (yeah, yeah, I know that Native Americans were here first), people then questioned whether or not Brendan's Isle was indeed America. Could America have been discovered as early as 521 AD?

In later centuries, we grew wiser and said that it was a bunch of baloney. Fire giants - pshaw! Even if all the stories were added later, he still couldn't have sailed in the North Atlantic in those little cow hide boats that Irish monks loved to sail in so much. Poor St. Brendan was reduced to being a fiction, a legend, a fairy tale - but not to everyone.

Next post, Tim Severin puts his money (and life) where his mouth is to prove St. Brendan not only sailed the Atlantic, but found America.
Posted by Mark Alford at 12:04 PM