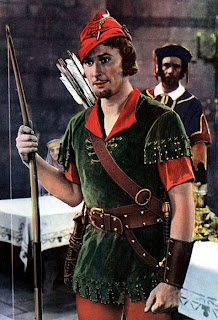 I recently saw Robin Hood and it was O.K.  The legend of Robin Hood, though, inspires me from time to time.  I have an old book by Pyle that has a pretty good compilation of the Robin Hood stories.  This, however, is not a post about Robin Hood per say.  Instead it is merely inspired by Robin Hood as wee look at mythical archers.  Who in mythology can match the famous Prince of Thieves?

Apollo -  Greek - obviously we start with the most famous god of archery - Apollo.  I've always thought of Apollo as being a bit of a goody goody and not much fun to read about, but his archery skills are supposedly second to none.  Once he was shooting at two of Poseidon's sons (who were giants).  The giants threw their javalins back at the first thing that they saw moving, which wasn't Apollo, but a doe (obviously they weren't the smartest things in the world, but hey, it is easy for me to say since I don't have the god of archery shooting at me at the time).  They missed the doe and hit each other instead.  Giants lose, Apollo wins! (Please see comments for additional notes on this loser.)

Orion - Greek - maybe a bit of a closer match, since Orion is not a deity.  He is one heck of an archer.  However, his archery story deals with someone else's shooting ability.  Orion is a hunter and he fell in love with Artemis, who actually fell in love with him as well (not Artemis's usual behavior).  Apollo didn't like it and tricked Artemis by challenging her to a shooting match.  Artemis, quite possibly Apollo's equal, agreed to shut her brother's mouth up a bit.  Apollo kept finding things for Artemis to demonstrate her skills on until he cleverly led her to shoot at this thing swimming in the ocean way, way off shore.  Apollo knew it was Orion, but Artemis did not and she shot him.  Because of her grief, he has been placed in the heavens by Zeus, with his bow and hunting dog. 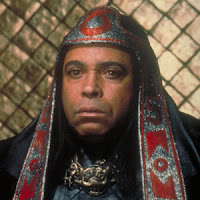 Arjuna - Hindu - This guy is also named The Undefeatable.  He has description after description of his mighty archer exploits. I he deserves more than this blurb, but I'm not going to give it to him.

Karna - Hindu -This guy is Arjuna's rival and is so cool he used a snake arrow (like James Earl Jones in the Conan movie). 'Nuff said!

Odysseus - Greek - His bow was so tight, only he could string it.  Not only that, he was able to kill several guys hitting on his wife after several years of being out of practice with it.

Cupid - Roman - I can't leave this little guy out.  He of course shoots people and makes them fall in love.  Not as cool as the snake arrow, though.

Ull - Norse - He is a god of archery among other things (much like Apollo).  He spends his winters hunting and his summers he likes to kick back in Hel for a while.  God Checker said he invented skis as well.  I thought they were joking, but it appears that he did.

Atlaua - Aztec - the patron of archers.  That's about it for him.  I looked and couldn't find any great archer stories.  I'm only including him on this list because I looked for him and didn't want to waste my time.

Hercules - Greek - threatened to shoot the sun because it was too hot.  Maybe this would be good enough for my list, but he didn't do it and so I do not count him as a great archer.

Houyi - Chinese - this guy, however, didn't just shoot the sun, he killed nine of them.  There used to be ten suns and they acted like brothers act.  Houyi, tired of them scorching people and ruining the land, killed nine of the brothers with his bow.


In my opinion, Houyi is the Archer Supreme!

In light of recent events, the title of Archer Supreme has been stripped from Houyi.  It is not due to the steroid use rumors that have been circling on the internet (they were only herbal treatments).  It is due to judges review - Artemis!  I know, I know, she wasn't even listed in the running, but read the comments and you'll see why she should have been.  I know that I have seen the error of my ways.  So let's hear it for Arrow-Pouring Artemis!
Posted by Mark Alford at 7:27 PM

Oh no you didn't!

Not only did you not give my FAVORITE ARCHER (Artemis) her own bold point, you totally attributed HER MYTH to APOLLO!!! I am shocked. Appalled. Those giants - Otus and Ephialtes aka the Aloadai - attacked Olympus and had the whole place on lockdown. I mean, Ares stuffed in a little jar, the whole nine yards. They called for Hera and Artemis to come out and sleep with them. They refused. Eventually tho, Artemis agreed to come out if they'd let out Ares. Then she showed up, not as herself, but in the form of a doe so irresistible that they both threw their spears, but she timed it - not accidentally - so they'd get each other.

Okay, okay, I'll grant you, Pseudo-Hyginus says that Apollo sends a deer between them, and the Odyssey clearly says Leto's son, not Leto's daughter, who was responsible for their destruction, but Callimachus (in 3 Hymn to Artemis), Apollodorous (in the Bibliotheca) Nonnus say it was Artemis who gets credit. (Ovid says Zeus was responsible for the giants' deaths.) But if you have to choose between those versions, WHY would you choose the Apollo version? The Artemis version has so much more panache! PLUS, that way it can totally be a myth about how the two big strong men discounted the power/strength of the WOMEN of Olympus in the confidence that they could beat the men, and then paid for it. Come on. SO COOL. It really IS like a Robin Hood story if you look at it that way ... I'll grant you, her arrows are painless, but she was still called "Arrow-Pouring Artemis" all over the place, and being a Huntress - with a bow - is really all she does. And she totally has a retinue of Archer-Maidens, which, can we just take a moment to recognize the awesome? Aeschylus apparently wrote a play about them (according the theoi.com), but it has sadly been lost.

You also skipped Atalanta, the hero(ine) who killed the Calydonian Boar and saved the young prince Meleager, shot two centaurs with arrows that attempted to rape her, and was so well known for her hunting/archery skills that she was one of the Argonauts.

You also missed the infamous archer Eros. Which ... well, he's no Robin Hood, so I can let that slide. And Alexander/Paris, whose archery made him more than a little weak as a hero in the Iliad.

And can we review? The Adventures of Robin Hood (1938) with Errol Flynn is my favorite movie EVAR. Thanks for the pic.

What can I say? I'm male and therefore a chauvinist.

Actually, I do stand corrected. This ineptitude goes more down to lazy research than anything against Artemis. She really does deserve to be on this list much more so than several of the others mentioned and I do appreciate your correcting my misdeeds here. So, screw Apollo! I never really liked him anyway! I am redoing the entry a tad to correct the errors of my ways! (Check the bottom of the entry.)

However, I am leaving Atalanta off the list. I never liked her. Sure she does cool things and all, I just never liked her (and this time it has nothing to do with chauvinism). I think it was the stopping to pick up the golden apples bit that just ruined her story for me. And I did include Cupid, which is practically Eros...but I almost didn't do that. Thanks for the slide on that one.

And last, but maybe most importantly, favorite movie ever? I mean, it's good, but can it really beat Raiders of the Lost Ark? I think not.

Upon going back and revising the post, I saw so many spelling errors that I really should have caught the first time. I was really tired when writing it... :(

Ha! I love that you changed the post (tho you certainly didn't HAVE to). Awesome addendum, too. (And how did I miss Cupid? Oh right, cuz he's boring ...)

I feel you on the Atalanta apple thing. I feel like it totally ruined her story, too. There was SOME possibility that they actually referred to different heroines, but that seems pretty unlikely to me.