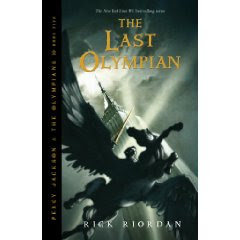 I haven't been able to write much lately, and for that I apologize.  The newest book int he Percy Jackson series has come out and it is entitled The Last Olympian.  It will take me several days to finish since I am reading it with my son.  If you have not read this series, even if you have no children to read it to, you should definitely do so.
As the name suggests, there is a nasty fate possible for the gods.  In fact, the titans are back and looking to cause problems.  Going only on that, I'm asking you (and no, you do NOT have to be a reader of this series to answer) to pick - if you were writing a story about the gods vs. titans, if only one Olympian could survive, who would you pick?
My scenario would have Zeus out of the fight early on - come on, they would all go after him first, right?  I thinking maybe Hermes as the final survivor.  His trickery, wily ways, and out and out speed to help him survive.
Well?  What about you?  Who would you pick?
Posted by Mark Alford at 2:39 PM

I think Zeus cause he is the strongest and beat them once.

My son wants it known that he picked Hestia and it looks as if he might be right, at least book wise, although at this point in the book all deities are still alive and kicking.

His thought was she'd be the last to die because she does nothing anyway so why would anyone go out of their way to kill her?